From Prairie to Pine

You are here: Home1 / News2 / From Prairie to Pine

From Prairie To Pine
Piano Solos by Saskatchewan Composers, Volume 2

The Saskatchewan Registered Music Teachers’ Association is delighted to present its second volume of FROM PRAIRIE TO PINE – PIANO SOLOS BY SASKATCHEWAN COMPOSERS – Volume 2, an excellent representation of our vibrant cultural community of emerging and established composers. You will find in this volume a wealth of artistic and pedagogical resources as well as outstanding creative expression.

Music by Saskatchewan composers conveys the image of our provinces to musicians and audiences near and far. It is an integral part in shaping our identity. As musicians, we have the ability to reflect through our music the diverse beauty of our province as well as its long held traditions, unique expressions, tenacious prairie spirit, and ever-changing landscape.

Saskatchewan has an abundance of excellent musicians. Creativity is a tradition. Our goal was to produce a collection that was pedagogically sound, would appeal to students and listeners, and be reflective of our cultural diversity. The result is a fine compilation of piano music indicative of Saskatchewan’s diverse musical landscape. The skill levels range from elementary to intermediate, containing technical and interpretative challenges appropriate for these levels.

Sincere gratitude is extended to the many dedicated teachers who have kept music growing in our province for the past century. Their commitment, generosity, and enthusiasm have created a lasting legacy of music making in Saskatchewan. As you peruse these pieces for use in studio, festivals, and recitals, may you be filled with an appreciation of the decades of efforts by those who have made this collection possible. 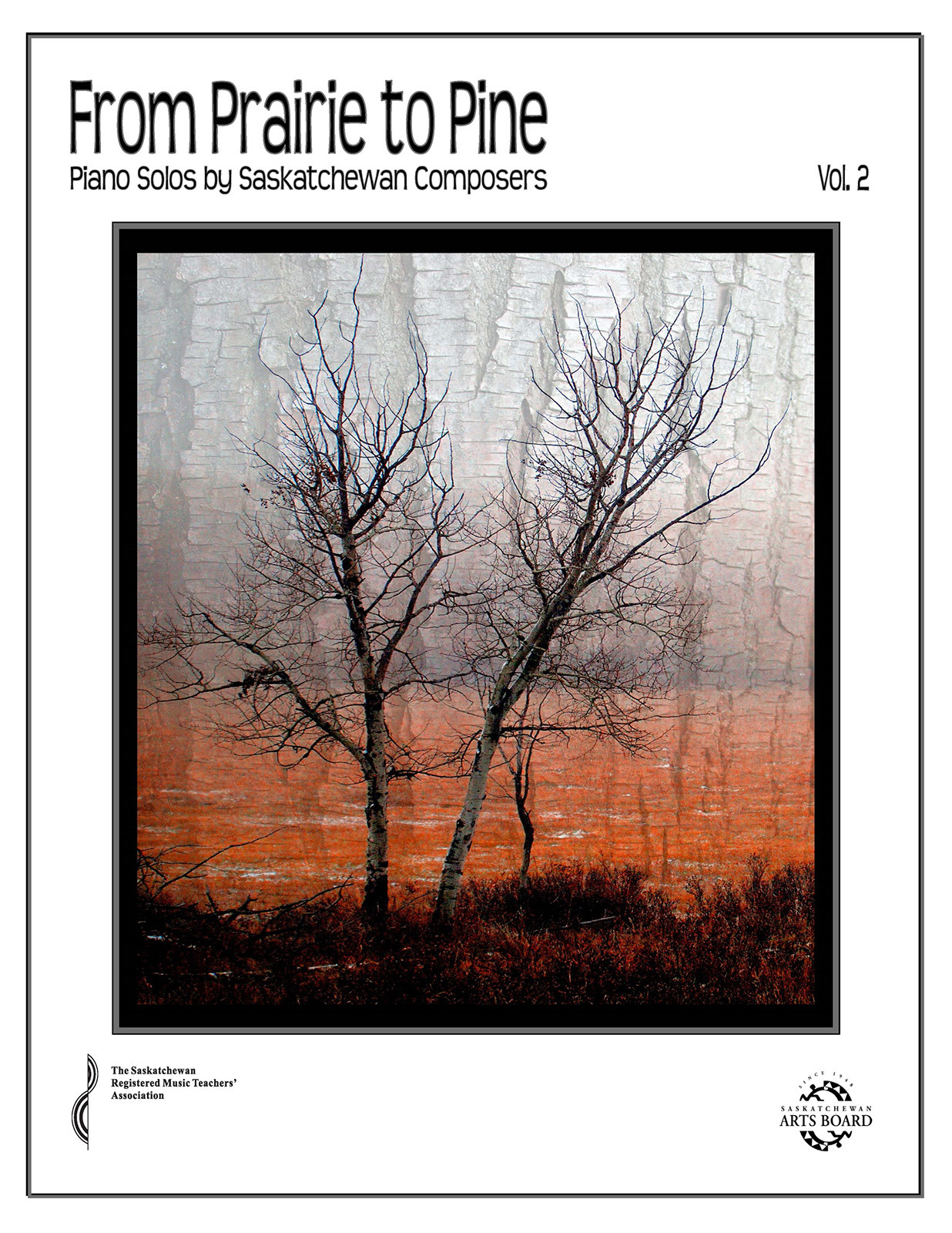 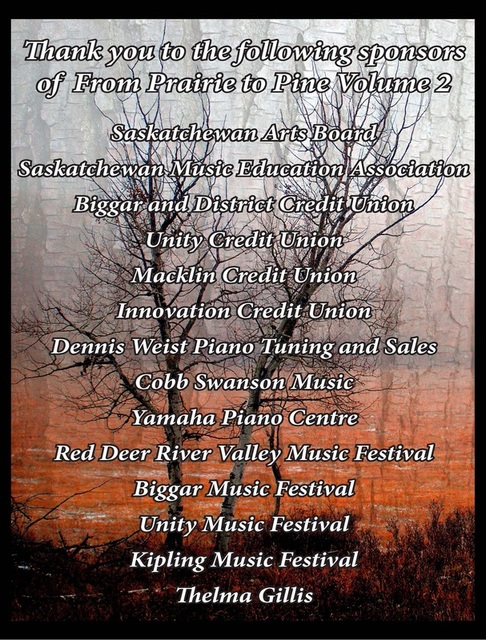 Tracks are listed in the order that they appear in the book.

Regina’s Cheryl Buddecke grew up in Moose Jaw, actively involved in piano teaching, accompanying, dance, and theatre. She completed her B.C.M. degree under the tutelage of David McIntyre. Many of her solo and chamber ensemble works have been performed at the Regina New Music Festival, Saskatoon Composer’s Society, and on CBC radio. Her most recent premiere is a commissioned work for the SYO.

Wes Froese was raised in Swift Current and makes his living as a musician in Saskatoon.  He currently divides his time between a private piano teaching studio, leading workshops,  and working at Sherbrooke Community Centre; a long term care home, as a wandering minstrel.

Janet Gieck completed a Bachelor of Arts in sacred Music with a composition major and an ARCT in piano performance.  Her music has been performed at the Saskatoon and Regina New Music Festivals and on CBC radio.  Janet currently lives in Saskatoon with her husband and three children where she is in demand as a piano/theory teacher and adjudicator.

Thelma Gillis spent most of her life in Theodore, Saskatchewan.  She studied with Dr. Lyle Gustin in Saskatoon, attaining an Associate from Royal Conservatory of Music, and Licentiate from Trinity College, London.  She taught music in Theodore, Foam Lake and Yorkton.  Her three children are music teachers.  Mrs. Gillis received the Canadian Caring Award in 1997 and the Saskatchewan Centennial Medal in 2006.

Sarah Konecsni’s  compositions reflect both her Saskatchewan surroundings, and many world cultures, as experienced on her travels.  She derives inspiration from her students, and strives to excite and delight pianists with her descriptive and imaginative compositions.  A recipient of many awards for piano performance, she was the winner of ‘Call for Compositions’ national competition for a piano piece for Canada Music Week 2009.  She is an RCM examiner, pianist, clinician, and adjudicator

Andrea Neustaeter moved from New Brunswick  to Saskatchewan to attend college and  married a grain farmer and Saskatchewan became her home.   In fall, Andrea can be found in the fields operating a combine.  The rest of the year is spent working with her local music festival committee, teaching a variety of piano, voice and guitar students and being involved in church music. Recently, she received a Professional Certificate in Arranging from Berklee College of Music.

Payton Reddekopp studies piano with Mrs. Beatrice Peters in the small rural setting of Pambrun Sk. She loves music of all kinds, sings with her family and plays piano duets with her sister, Presley.  This song is for a young cancer survivor, Serena Cooper and is special to Payton as it is her first dedicated composition.

Since graduating from the University of Saskatchewan, Penny Rosten has enjoyed a varied career in music as a teacher, accompanist, singer, choir director, composer, and performer.  Born in Melfort, raised in Swift Current, Penny presently resides in Saskatoon. The influence of “Life on the Prairies” is evident in her piano solos, vocal and choral music. Penny’s passion is in creating compositions that encourage learning by connecting to the student’s interests and imagination.

Lynette Sawatsky holds  an ARCT in piano performance and a Bachelor of Education (elementary) from the U of S.  She enjoys teaching her own piano students and working with other young musicians as a guest clinician and adjudicator.   Lynette resides in Saskatoon with her husband and four children and enjoys going for long walks along the beautiful South Saskatchewan River, especially in the “Springtime.”

Born in Saskatoon and raised in North Battleford, Paul Suchan is a graduate of the double degree music education program from the University of Saskatchewan and has taught high school band and music in North Battleford Saskatchewan. Paul’s works are frequently performed throughout Saskatchewan and Canada by groups including the National Youth Band of Canada and various university, high school and community groups.  As well, Paul has a love for jazz and latin music, and also enjoys philosophy, literature and soccer.

Born and raised in Saskatoon to twin generations of farming families, Glenn Sutherland now farms part-time with  his father on the family farm near Eston, SK. Otherwise, Glenn is a conservation biologist –  working to protect species-at-risk in the boreal region – and composes choral and instrumental pieces. This piano piece evokes the feelings of harvest time.

Laurie Wiens lives on a farm near Herschel, Sask. with her husband and four children.   She works as a physiotherapist.  Music has always been a part of her life. Growing up in Saskatoon she took piano lessons and completed her grade nine piano.  Laurie has continued to enjoy music through singing in choirs and playing piano for her local church.  This is her first piano composition.

Order From Prairie To Pine